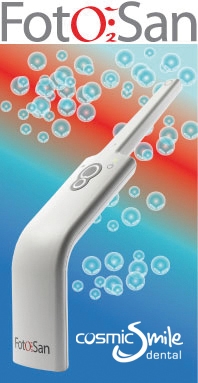 FotoSan works with light activated disinfection (LAD), a treatment based on a combination of a photosensitiser and a powerful red light. LAD works by the photosensitiser attaching to the membranes of microorganisms and absorbing energy from the light. It releases energy to oxygen, which is then transformed into highly reactive oxygen species like ions and radicals. These destroy the microorganisms instantly and effectively.

It is particularly useful in the destruction of bacteria embedded in biofilm, works instantly and does not create antimicrobial resistance. The treatment is fast and easy to apply and is without any side effects at all.

As a result, light activated disinfection (LAD) has a number of advantages in relation to both traditional antibiotic treatment and chemical disinfectants.

We will be using Fotosan for the treatment of:

We have treated numerous cases with only positive results and expect to use it much more frequently and in conjunction with our other treatment modalities like the dental laser.

Researchers found that teenagers aged between 12 to 16 years of age who were addicted to computer games were more than twice as likely to suffer from tooth decay and caries compared to others.

They also found that teenagers who had no parental restriction on screen time tend to eat more when in front of the computer compared to those with parental rules. They are more likely to snack on sugary foods while absorbed in computer games.

Three meals a day is much healthier than snacking every few hours, especially if you choose foods that do not contain sugars. Acids are produced from sugary foods and drinks which will degrade enamel. Encourage them to drink, or at least wash the food down with water when possible.

The Polident Extra Hold Denture Adhesive Cream has been pulled because of potential health risks from long term excessive use, its manufacturer GSK announced today.

GSK said it had stopped the manufacture, distribution and advertising of the zinc-containing denture adhesive as a precautionary measure after it had received an “increased number” of adverse event reports last year.

According to a statement from GSK released today, the reports linked the denture adhesive to the development of myeloneuropathy and blood dycrasias.

“Together with the published literature, these [reports] suggest that excessive use of these products, typically for several years, may lead to the development of excessive levels of zinc in the body associated with copper deficiency,” the statement said.

Symptoms may include sensory disturbance, limb weakness and walking difficulties.

“These reports are very rare, given that several million people are users of the products,” it said.

The statement said patients who used the Polident product as instructed could continue to use it but warned those who had used it in excess for “several years” to stop using it and change to a zinc-free alternative.

“While the majority of patients do use these products safely, some patients apply more adhesive than directed and use it more than once per day, usually due to ill-fitting dentures,” it said.

GSK asked pharmacists to report any neurological symptoms suffered by long term excessive users of the denture cream to 1800 028 533. 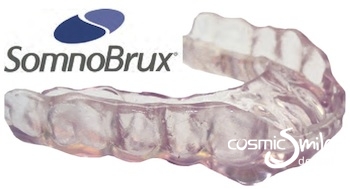 Sleep Bruxism is the technical term for grinding and clenching teeth during sleep that abrades teeth and may cause facial pain. It is a very common condition and may be a habitual nightly occurrence or manifest due to increased stress or anxiety. Prolonged bruxing can result in a number of serious problems and without treatment can irreversibly damage the structure and surface enamel of your teeth. Moderate to severe sleep bruxism if left untreated can result in jaw pain known as TMJ pain, headaches, damaged and loose teeth and gum recession.

SomnoBrux is worn during sleep to prevent tooth damage caused by grinding, and to alleviate jaw and muscle pain. Similar to a mouth guard, SomnoBrux provides a protective barrier between your tooth surfaces. Your SomnoBrux is custom made making it a precise snug fit and allowing you to have full range of mouth opening and closing. You will be able to talk, yawn and drink water while wearing the splint.

If your teeth are worn, damaged or sensitive and/or if you suffer from pain in your face or jaw, then the SomnoBrux may benefit you. Call our office on 9904 2880 to find out more.

Treating gum disease has been found by researchers to ease inflammation and pain associated with a severe form of rheu- matoid arthritis. The study fromCase Western Reserve University School of Dental Medicine and University Hospitals of Cleveland supports previous findings that gum disease promotes systemic inflammation. The study, published in the Journal of Periodontology, shows the importance of treating dental disease for patients suffering from rheumatoid arthritis.

The study found that non-surgical periodontal treatment, with or without the use of other medications had improvement in arthritis symptoms. Gum diseases now linked to the development of heart disease, diabetes and risk of premature births. The current study shows that treating dental disease may also emerge as an important intervention that can ease rheumatoid arthritis pain.

Recently there have been reports regarding the “unjustified use of potentially cancer-causing CT scans”. In a Sydney Morning Herald article (http://tinyurl.com/yfqr8oe) they stated that more than 400 new cases of cancer a year are attributable to diagnostic radiology.

In the SMH article they wrote of inappropriate CT referrals for patients presenting with back pain. The risks for young and middle-aged patients where recurrent imaging would be required were significant as the results are cumulative.

”Although the risk of a CT scan is relatively small, a CT of the abdomen and pelvis may expose the patient to a dose of up to about [20000 microSv] and thus an increased risk of inducing a fatal cancer of one in 1000.” was one of their quotations.

In dentistry, the use of imaging is routine, but with typical intraoral x-rays, the exposure level is 2-4 microSv. Digital panoramic x-rays (OPGs) about 10-15 microSv.

When more precise measurements of the jaws are required, the patient was typically sent to a radiology clinic for a dental CT. They allow us to see things we simply cannot see in standard x-rays or OPGs. We use these scans prior to implant or graft placement, to assess impacted wisdom teeth or unusual root shapes prior to root canal therapy or to determine the extent of an abscess or lesion. However, with the Vatech Ewoo PAX Uni-3D machine in our clinic, we are able to do a new type of scan called a cone beam CT (CBCT), this is a form of CT that allows the same 3D construction of the scanned area but without the exposure of a conventional CT.

With the cone beam CT, the reduction in exposure dose is via a pulsed exposure. Our scans are a maximum of 5cm wide so only the area of interest is exposed. The total dose is less because of a pulsed exposure and produces improved diagnostic information because the resolution is better than CTs done in a typical radiology clinic.

One of our CBCT scans has about 30-40 microSV. So one abdominal medical grade CT has about 500 times more radiation than a dental CBCT. However, because there is no safe lower limit, we do make sure that the benefits outweigh the risks and you can be sure that you are getting the least amount of radiation for the ideal diagnostic result.

One Response to “May 2010 Newsletter”