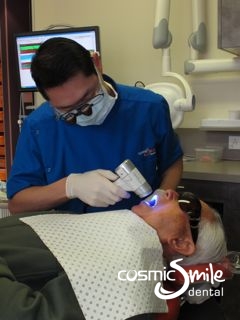 It’s painless, takes minutes and it could save your life

The Velsope is a state of the art instrument we are using to help detect oral cancer before it becomes life threatening. Oral cancer is one of the most deadly forms of disease because nearly two thirds of all cases go undetected until they are at an advanced stage when they become more difficult to treat.

Around 800 people in Australia die each year from oral cancer which is more than 2 per day. Tobacco is considered to be the main cause of mouth cancer, with three in four cases being linked to smoking. Drinking in excess is also a known factor, with those who both smoke and drink to excess being up to 30 times more likely to be at risk. Other risk factors include a poor diet. For young people under the age of 40, the disease is on the rise because the Human Papilloma virus (HPV), a sexually transmitted virus is also linked to the disease.

A simple, painless exam with the Velscope can detect abnormal cells in the mouth that are not even visible to the naked eye and before they produce any pain or symptoms!

As Velscope uses a special light that sees below the tissue surface, no dyes or unpleasant mouth-washes are necessary. A visual and tactile exam is still required, but it alone is less effective than using the Velscope.

Of course, most exams are negative for any lesions at all, but it’s best to be sure. A once a year Velscope exam is inexpensive ($25), but could save your life. It only takes a few minutes and can be completed during a routine hygiene appointment.

Ask us about Velscope at your next visit or schedule an appointment to learn more.